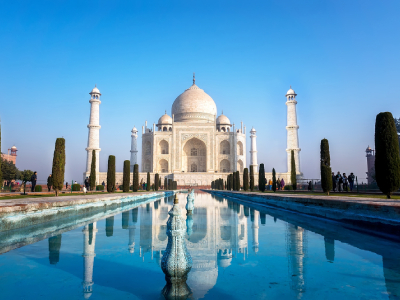 In this private Taj Mahal Sunrise tour, witness the beauty of Taj Mahal during sunrise & sunset and visit one of the most romantic monuments of the World. Explore the grand monuments and marvellous architecture with overnight Agra Trip from Delhi. Visit the Taj Mahal, one of the world’s most romantic monuments. Witness the sunrise over the marble mausoleum of the Taj Mahal & Sunset view from Mehtab Bagh. Apart from that, visit the impressive Agra Fort & Baby Taj.

Upon arrival representative will pick you up in the morning at 9.00 am from your desired location in Delhi to proceed for Agra by Car. As you sit in the car, can you feel the excitement that will grip your mind and heart as you start this wonderful tour with your drive to Agra. On arrival and proceed for sightseeing tour of Agra.

Old Market : Old Market An Head to the congested Old City behind the Jama Masjid to experience the heart of Agra. Roam around the narrow lanes housing a variety of spices, clothes, saris, jewellery, shoes, crafts and snack stalls.

In the Evening after Completion of Agra Sightseeing, Our Chauffer Will Drop You at Your Hotel with Sweet Memories of your Tour!

After exploring Agra, you will drive back to Delhi. Later get transferred to the New Delhi Airport/Railway Station for onwards journey. The tour ends with the sweet memories with Delightful India Holidays.

Completion of Agra Tour, Our Chauffer Will Drop You at Your Hotel with Sweet Memories of your Tour!!!