Undoubtedly the best bet of India! The Golden Triangle Group Tours of India comprises of three magnificent cities viz Delhi, Agra (including Taj Mahal) and Jaipur (the capital of Rajasthan). Select one of our scheduled departures for ‘Golden Triangle Tour’ to match with your India trip plans and join our exciting India group tour to explore the well travelled circuit of Golden Triangle which host the best of North India’s cultural history and the lifestyle of its people. The tour includes a visit to some of beautiful forts, palaces, temples, museums and observatory and on the top of all the most beautiful ‘Taj Mahal’ which is a classified as a UNESCO World Heritage Site. 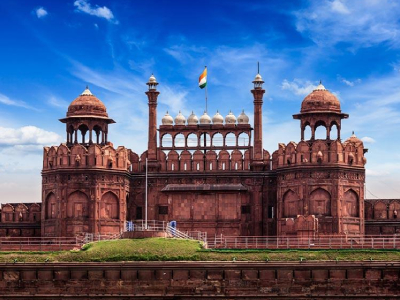 After reaching New Delhi Airport, our DIH tour representative will pick you up and drive to the hotel. Have an assisted check-in at the hotel.

The capital of India is a bustling metropolis that successfully combines the ancient and the modern in its folds. Delhi can broadly be divided into two parts, Old Delhi and New Delhi. Old Delhi was the capital of Delhi’s Muslim rulers notably the Mughals between 17th and 19th centuries. New Delhi is referred to as the Imperial city. Enjoy an overnight stay at Delhi. 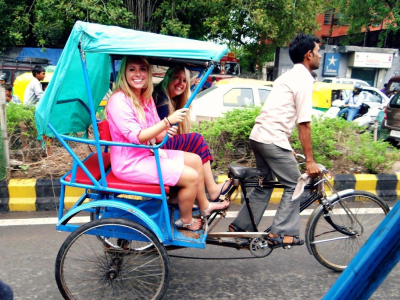 Start your day with a visit to Old Delhi. Begin at Jama Masjid, India's largest mosque. Revel in an exhilarating rickshaw ride through the by-lanes of Chandni Chowk (Silver Street). Walk through the old dusty alleyways and other interesting sights! Drive past the sprawling Red Fort, built in 1648. Proceed to New Delhi and see the colonial architecture that defined the British era in India. We’ll travel to Qutab Minar complex - the tallest tower in world for centuries, erected by first Islamic rulers of India and still the most imposing, artistically carved and engraved sandstone pillar anywhere!

Culminate this day tour with a visit to a famous Sikh Temple, we go to our last stop Gurudwara Bangla Sahib. Sikhism is a progressive religion (and in many respects, ahead of its time).Return to the hotel in the evening and have a delicious dinner. Enjoy an overnight stay at Delhi. 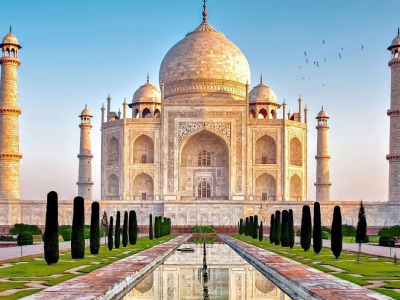 Breakfast at hotel. This morning drive to Agra, the yesteryear capital of the mighty Mughal Empire and currently home to some of the world’s top tourist sites. Upon arrival transfer to your hotel.

This afternoon visits the magnificent Agra Fort, a UNESO World Heritage site built and added to between the 16th and 17th centuries by successive rulers of the Mughal Dynasty. Later visit the Taj Mahal at sunset, one of mankind's greatest architectural feats. Enjoy an overnight stay at the hotel in Agra. 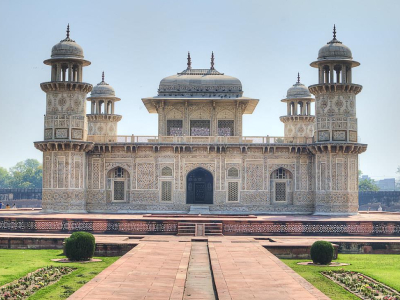 This is the day which you were waiting for on your Golden triangle group tour. Today, we get up early in the morning to visit the world’s most beautiful monument ‘Taj Mahal’ during the sunrise. This most famous Mughal monument was constructed by Emperor Shah Jahan in 1630 in memory of his beloved wife Mumtaz Mahal who died while giving birth to their 14th child.

Later come back to your hotel, have your breakfast and then proceed for sightseeing of grand Agra Fort - Built by a great Mughal emperor Akbar, this grand fort is made of red sandstone. Situated on the bank of river Yamuna the main attraction of the Agra fort is the Taj Mahal facing room where Shah Jahan was house arrested by his son Aurangzeb. Later you will be taken to the Tomb of Itimad-Ud-Daulah. Also known as the 'Baby Taj' or a 'Jewel Box', the tomb exudes immaculate architectural beauty. The stone inlay beautifully adorns the monument. Enjoy an overnight stay at the hotel in Agra. 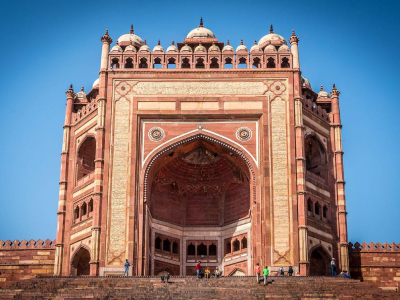 Morning after relaxed breakfast head to Jaipur, the capital of erstwhile state of Rajasthan popularly known as the ‘Pink City’ because all the pink coloured buildings and monuments dotted all over in the city.

En route we stop to visit Fatehpur Sikri, Known as the ‘Deserted city’ or the ‘Ghost City’, this beautiful and massive red sandstone fort was built by Mughal Emperor Akbar to commemorate the birth of his son Jahangir. Mughals used Fatehpur Sikri as their capital and abandoned it after about 15 years due to scarcity of water in the region. Meet with your guide at Fatehpur Sikri and enjoy sightseeing tour of the fort, Dargah of Khwaja Mainuddin Chishti and Buland Darwaja (the largest door in the world).

Also we stop at a small village of the Dausa district. Though the village is in ruins now, tourists throng the village to see Chand Baori which is a huge and beautiful historical step well, a unique idea conceived by the natives to work as a water reservoir.

Later we continue drive to Jaipur and Upon arrival in Jaipur in the evening, Max Holiday representative will assist you for check in at your designated hotel. Freshen up and relax at the hotel. Spend rest of the day in comfort at your hotel room. Enjoy an overnight stay at the hotel in Jaipur. 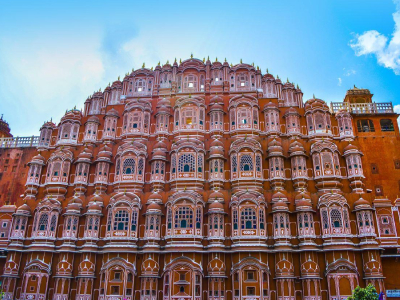 Tour begins in the morning with a breakfast a little early to reach Amber Fort on time as at Amer Fort very limited elephants are available for a ride to reach the fort and are subject to availability. Surely we do not want to miss the chance of enjoy a ride on an elephants back. If not then, we will reach the hill top by our own car or an ordinary jeep available near the fort.

Enroute take a photo stop at Hawa Mahal which is also famous to travelers as "Palace of the Winds". Visit Amber fort - situated on a ridge just outside Jaipur city. The impressive fort of Amer is overlooking the Jaipur city from the top of the Aravali Hill. At the foot of the hill, you will mount your decorated elephant for the slow but steady climb up to the main gate of the Amer Fort, making your entrance in the time honored fashion. The fort was completed in the early 18th century, took over 100 years to build and now this deserted fort offers a fascinating insight into the lifestyle of the Royal family to the travellers.

After visiting Amber fort, visit Gaitore or Gaitore Ki Chhatri – It is a cremation group for the members of the royal families and it is just beautiful for its Chhatri “Cenotaphs). Later enjoy local tour of Jaipur visit City Palace which is not only a famous museum but is also the house to the royal family of Jaipur. A huge part of the palace is converted into museum and has been open for the public. Many antiques and artifacts belonging to the ruling family are housed here, including a collection of weapon, clothes, jewels etc. After visiting the museum, pay your visit to Jantar Mantar - the largest observatory in India constructed by Raja Jai Singh II. 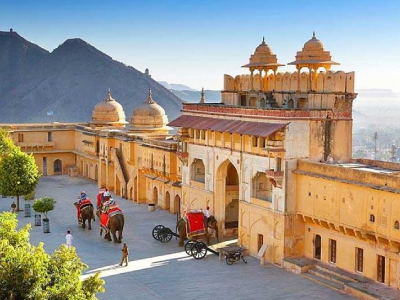 This is the last day of the tour. Check-out from the hotel on time and proceed towards to Delhi. On the arrival, Transfer to the delhi international airport for your flight back home or towards next destination. The tour ends with the sweet memories with Delightful India Holidays.