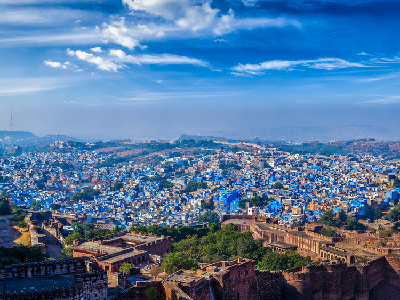 Jodhpur is a city in the state of Rajasthan, situated in close proximity of the Thar desert, the only warm dessert of India. Jodhpur is also famous by the name of ‘the Blue City’, because of the blue colour of most of the buildings of the old city area. Jodhpur is a popular tourist destination, featuring many beautiful palaces, forts, and temples, apart from a stark, scenic desert landscape. Immerse yourself into this city by participating in a Jaisalmer sightseeing tour to make your holiday in Rajasthan truly memorable.

PLACES TO VISIT IN JODHPUR

Mehrangarh Fort - Outer View Perched on a 150 m high hill its sprawl is the most formidable and magnificent fort in Rajasthan. Rao Jodha but subsequent rulers of Jodhpur have also added to it over the centuries. A meandering road leads to the from the city 5 kms below. Battle scars of canon ball hit by attacking armies of Jaipur can still be seen on the second gate. To the left is chhatri of Kirat Singh Soda, a soldier who fell on the spot while defending the fort against the armies of Amber.

Toorji Ka Jhalra - commonly called stepwell of Jodhpur, is an intricate design of stepwell, one of the few remaining structures depicting the traditional water management systems of Jodhpur. This architectural wonder was built by the queen-consort of Maharaja Abhaya Singh, a sign of the age-old tradition of the region where royal women were in charge of overseeing the public water works. The design and structure help onlookers comprehend the lifestyle of the earlier generations who had used it in its prime, with the site serving as the local watering hole for its time.

Clock Tower - A prime attraction of the city, is the Clock Tower and the colourful Sardar Market near it. Narrow alleys lead to quaint bazaars selling textiles, antiques, silverware and handicrafts.

Jaswant Thada - On the way down from the fort, on left is Jaswant Jaswant Thada Outer View Thada, the graceful marble cenotaph of Maharaja Jaswant Singh II. His son Maharaja Sardar Singh built this monument known as the Taj Mahal of Marwar in the memory of Maharaj Jaswant Singh II of Jodhpur. The main memorial has been built like a temple with intricately carved marble stone. A visit to this structure is through the rocky hills giving it a secluded and a mystic aura.

Ummaid Bhawan Palace - The palace boasts of a combination of Indian and European style of architecture. A part of the palace still serves as a residence to the former royal family, while other two parts of the palace are converted into Taj Palace Hotel and museum. The museum is open to the public, while the hotel is only accessible to the guests and the entry to the residence is prohibited.

Mandor - was the former capital of Maharajas of Marwar and is located about 5 miles north of Jodhpur but was later abandoned for the security of Mehrangarh fort. Here you will find the dewals or cenotaphs of Jodhpur's former rulers. Unlike the usual chhatri-shaped cenotaphs typical of Rajasthan, they were built along the lines of a Hindu temple, four storeys high, with fine columns and an elegant spire, all in red sandstone.

In the Evening after Completion of Jodhpur Sightseeing, Our Chauffer Will Drop You at Your Hotel with Sweet Memories of your Tour!!!