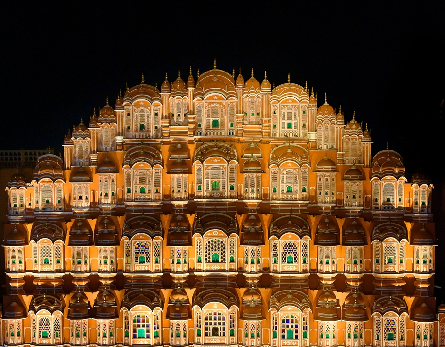 Explore the grand monuments and marvellous architecture with overnight Jaipur Trip from Delhi. Jaipur is also known as the “Pink City“, the capital and the largest city of the Indian state of Rajasthan. Jaipur prides itself on many landmarks, panoramic landscapes, and traditional architecture. During this tour of Jaipur, covers all historical places in and around the city. This city gives you the traditional heritage ambience perfectly blended with the royalty and rich culture of this city.

Upon arrival representative will pick you up in the morning at 7.00 am from your desired location in Delhi to proceed for Jaipur by Car. As you sit in the car, can you feel the excitement that will grip your mind and heart as you start this wonderful tour with your drive to Jaipur. On arrival and proceed for sightseeing tour of Jaipur.

Amber Fort: One of the most magnificent destinations in Jaipur, on the rugged hills outside of town sits Amer Fort. (Amber Fort). It is an example of fascinating blend of Hindu and Muslim architecture built in red sandstone and white marble. The highlight of the fort is the Sheesh Mahal (mirror Palace), a palace known for its craftsmanship in mirrors.

Panna Mina Ka Kund : Panna Mina Ka Kund is the only well restored and functional stepwell in Jaipur. The baori’s geometric staircases are a stunning combination of ingenious Indian engineering and architectural beauty; the symmetrical arrangement of stairs in a criss-cross manner, the recessed doorways and the octagonal gazebos.

Royal Gaitore :The royal cenotaphs, just outside the city walls, beneath Nahargarh, are an appropriately restful place to visit and feel remarkably undiscovered. The stone monuments are beautifully and intricately carved. Maharajah Pratap Singh, Madho Singh II and Jai Singh II, among others, are honoured here. Jai Singh II has the most impressive marble cenotaph, with a dome supported by 20 carved pillars.

Nahargarh Fort : Nahargarh Fort stands on the edge of the Aravalli Hills, overlooking the pink city of Jaipur in the Indian state of Rajasthan. The view of the city from the fort is impressive Along with Amer Fort and Jaigarh Fort, Nahargarh once formed a strong defense ring for the city. The fort was originally named Sudarshangarh, but it became known as Nahargarh, which means 'abode of tigers' so this fort is also known as the Tiger Fort. This Place was used as a picnic spot for the members of the Royal family. Later drop at hotel in Jaipur. Enjoy an overnight stay at the hotel in Jaipur.

DAY PLACES TO VISIT IN JAIPUR

Hawa Mahal : Hawa Mahal – The most famous landmark of Jaipur, the palace of winds built by Sawai Pratap Singh was actually planned for the royal household to have a look at everyday life of the city. The palace has tier upon tier of curved arch surmounting fairy casements with “jali” – latticework screens.

City Palace : City Palace forms one of the most famous points of interest and a major milestone in Jaipur. The beautiful development was designed by Maharaja Sawai Jai Singh during his rule. Among the various fortifications and castles of Jaipur, Town Structure is unique, with its excellent art and structure. Town Structure complicated protects a large place, which is separated into a series of home gardens, courtyards and structures.

Jal Mahal : Jal Mahal is a water palace that is situated in the midst of the beautiful Man Sagar Lake in Jaipur City. Jal Mahal is an exceptional structure of the Rajput culture. The wonderful five storied building built in red sandstone.

After exploring Jaipur, you will drive back to Delhi. Later get transferred to the New Delhi Airport/Railway Station for onwards journey. The tour ends with the sweet memories with Delightful India Holidays.

Completion of Agra Tour, Our Chauffer Will Drop You at Your Hotel with Sweet Memories of your Tour!!!